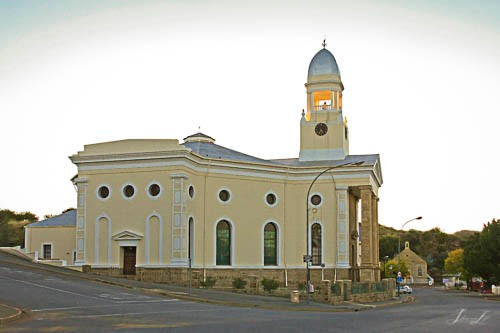 The Dutch Reformed Church in Colesberg

The Colesberg area is sheep farming country and over 500,000 hectares of land are devoted to this activity. Merino sheep are of particular importance. It also has some stud-farms breeding race horses.

The town was founded in 1830 and was initially called Toverberg which was the name of a prominent hill in the area. The hill is visible from 40 km away and is now called Coleskop while the town was later renamed Colesberg after Sir Galbraith Cole, Governor of the Cape Colony.

The area around Colesberg saw a number of battles during the Anglo-Boer war and there are a number of different sites which can be visited. These include Grenadier Guard Rock, Plato Camp, Suffolk Koppie and the site of the Concentration Camp which is now in ruins.

The town has a number of historical buildings icnluding the Colesberg-Kemper Museum.

A quiet street in Colesberg