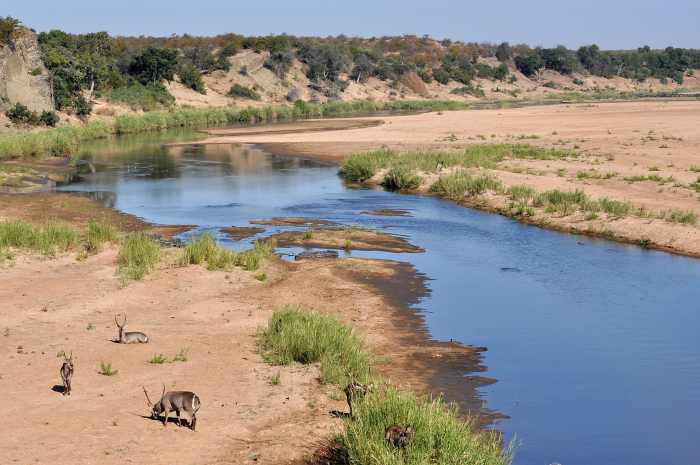 Waterbuck graze along the Olifants River

Kruger National Park is South Africa's top game park. It is a well-known and popular tourist resort. Hundreds of thousands of visitors visit the park each year and booking is essential for the peak months which include April, June, July, August and December. The winter months are popular as they are cooler and the grass and bush are thinner making game viewing easier. There is also less water around which means that game tends to congregate around rivers, dams and waterholes. Summers are very hot but you get to see a lot of young animals. Most of the rainfall occurs in spring and summer which leads to the bush being thicker and makes water more readily available which tends to cause the game to disperse. On the plus side for birders, during spring and summer the resident bird population is augmented by many species of migrant birds. Most people visiting Kruger do so in their own, or hired, cars. It is an advantage to have a car like a SUV where you sit higher off the ground as this allows you to see when the grass and bush are longer. Those visitors staying just outside the park often make use of the many game drives that are available. Some bus tours are also available.

It is a massive 360 km in length with a width of up to 65 km. It is situated in the north-eastern region of South Africa along the Mozambique border. Portions of it fall into the provinces of Mpumalanga and Limpopo. The road network inside the park is well-developed. Generally there are tar roads linking camps to each other but otherwise the roads are mainly gravel. This need not be a concern as the roads are generally well maintained and suitable for all types of car. Cars towing caravans need to stick to the tar roads. Remember that you need to stay in your car and only get out where it is clearly indicated that you can do so. Many of the animals in the park really are dangerous and should not be approached too closely. Give the animals some room which helps keep them relaxed and gives you a bit of space if the animal gets aggressive (elephants in particular!). 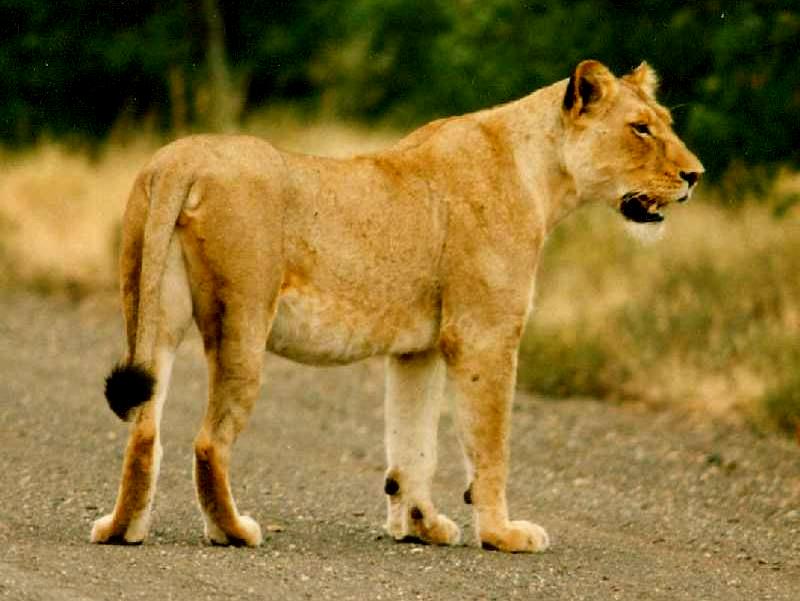 Above - The Lions of Kruger National Park are the star attraction. Many people visit the park looking for the Big 5 but the Lion is one of the 'must see' mammals. The Leopard almost commands the same status but I think that the Lion is the 'special one' for most people.

The park began as the Sabi Game Reserve in 1898. It was proclaimed by the president of the Transvaal Republic Paul Kruger, after whom the reserve was renamed in 1927. In its early years the park was mainly accessed by means of train trips. In 1927 only 3 cars entered the reserve. One of the influential people in the parks history was Warden James Stephenson-Hamilton. He was warden of the park for 44 years in its early stages of development. There are numerous historical sites scattered throughout the park. These vary from the Thulamela Archaeological Site in the north to the spot where it is believed that Jock of the Bushveld was born. If you are interested in the historical sites then make sure that you buy the map booklet which highlights the sites. Unfortunately sometimes you arrive at a historical site and can’t see anything because of the length of the grass. Another problem is that some sites are missing there plaques which describe the significance of the spot.

The park is accessed via a number of entrance gates and there are 21 rest camps of different sizes in the reserve. The camps in the southern half of the park are very popular as they are easier to reach. This means that the roads in this part of Kruger National Park are busy which can be a good and a bad thing. It’s good because you have lots of eyes looking for elusive animals such as Leopard and Cheetah, and bad in that it can get pretty hectic. Popular camps in the south include Satara, Lower Sabie and Skukuza. The northern half of the park is less easily accessible and tends to be quieter. Favourite camps in the northern regions include Shingwedzi and Olifants.

There are a number of different habitats in Kruger National Park each dominated by certain vegetation and animals. The main vegetation types include mopane woodlands, savanna grassland, mixed thorn and marula woodlands, mixed woodland and mixed woodland. Over 200 species of trees have been identified in the park. The rest camps are great places to identify trees and other plants. With the exception of Pretoriuskop camp all the plants in the rest camps are naturally occurring in the area. Look for the Impala Lily which is often seen as an icon of Kruger National Park. 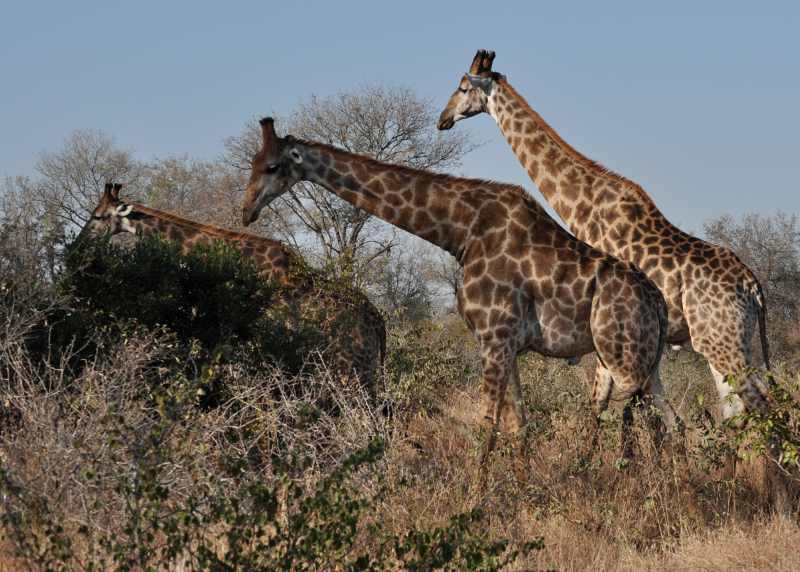 Above - Elephants aren't the only large mammal in the Kruger National Park. There are plenty of Giraffe as well.

Most visitors to Kruger National Park want to see mammals and they shouldn't be disappointed. Besides being home to the Big 5 there are plenty more to look for. Officially the list of mammals is over 140 species but this includes many bats, mice, shrews and other small mammals that you are very unlikely to see. Lion are seen fairly commonly but Cheetah and Leopard less so. Elephants and Buffalo are hard to miss in most areas of the park. Rhino numbers are way down on what they were due to the continual poaching, despite efforts from the Parks Board and private sector to curb it. Some species of antelope such as Impala are very common but others, like Sable Antelope, are not often seen. Click here for a list of mammals.

Bird-watchers will be keen to hear that over 500 species of birds have been identified in the park. Summer is the best time to go birding in the park as the migrant species are back and many other species are in their breeding plumage. Some birds are found easily across most of the park but others are restricted to certain areas as they are linked to certain habitats. The rivers and dams are great places to look for larger birds such as storks, egrets, herons, ducks, geese and more. The rest camps are generally full of bird life and you can easily spend a few hours wandering around a camp and record a substantial list of sightings. In some camps the starlings, weavers and hornbills have become a bit of a pest as they wait for leftover food on the restaurant tables or by the huts. These birds offer great opportunities for photography although the challenge is to try and get them in a natural environment and not sitting on the back of a chair. Some of the camps have owls in residence and they can be heard calling in the evenings. Here is a list of birds that may be seen.

Over 110 species of reptile have been recorded in Kruger National Park. These include over 50 species of snakes and a further 50 species of lizards. Five species of tortoise and terrapin have been recorded. The biggest reptile in the park is the Nile Crocodile and plenty of these may be seen along rivers and at some dams and waterholes. Some individuals of the African Rock Python can reach a length of 6 metres making them the longest species of reptile to be found in Kruger. Around 12 species of snakes can be considered as dangerous but fortunately it is rare for visitors to encounter them. Here is a list of reptiles that might be seen. 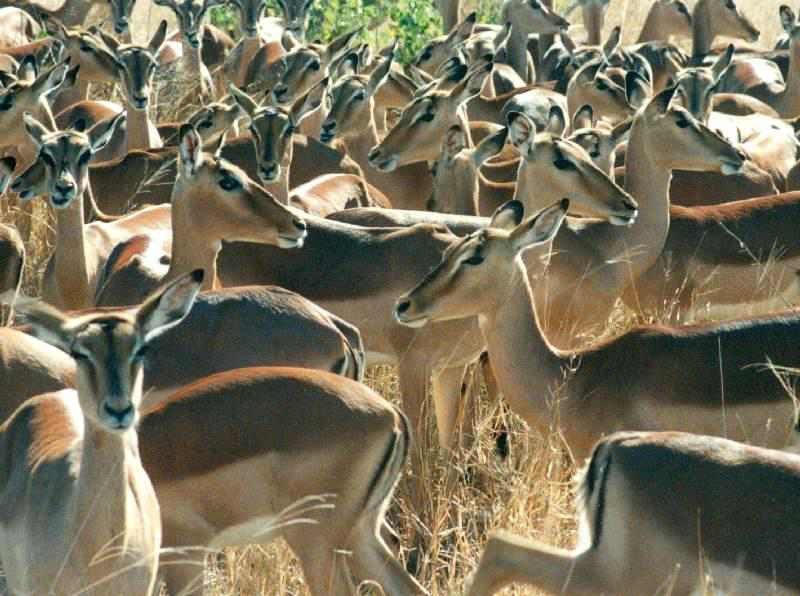 Above - If there is one mammal that you are going to see in Kruger National Park it is the Impala. Very often it is the fist mammal that you find after entering the park. There are over 100,000 of them in Kruger! Despite most people ignoring them, I still think that they are one of the most beautiful of the antelopes. 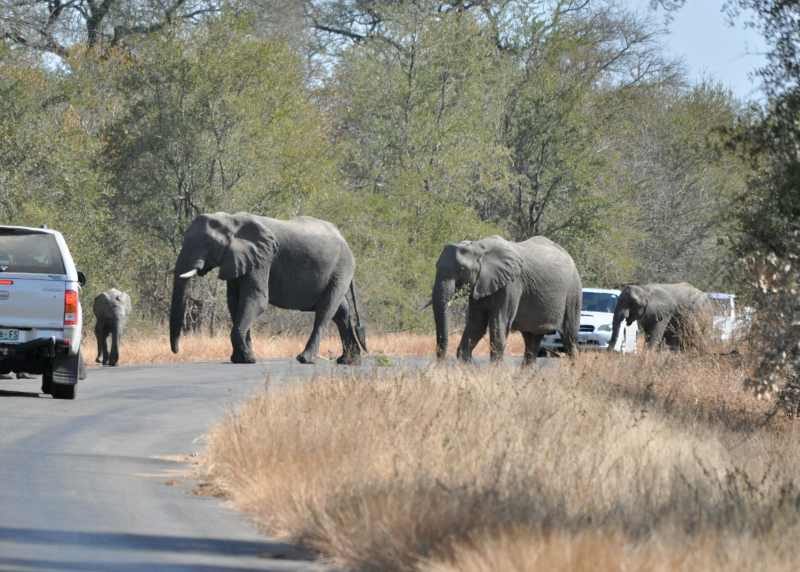 Above - Impala aren't the only common mammal in the Kruger National Park. The numbers of Elephant have grown tremendously over the last decade or two. There are probably too many of them right now. Remember to keep your distance from them - they can be dangerous. 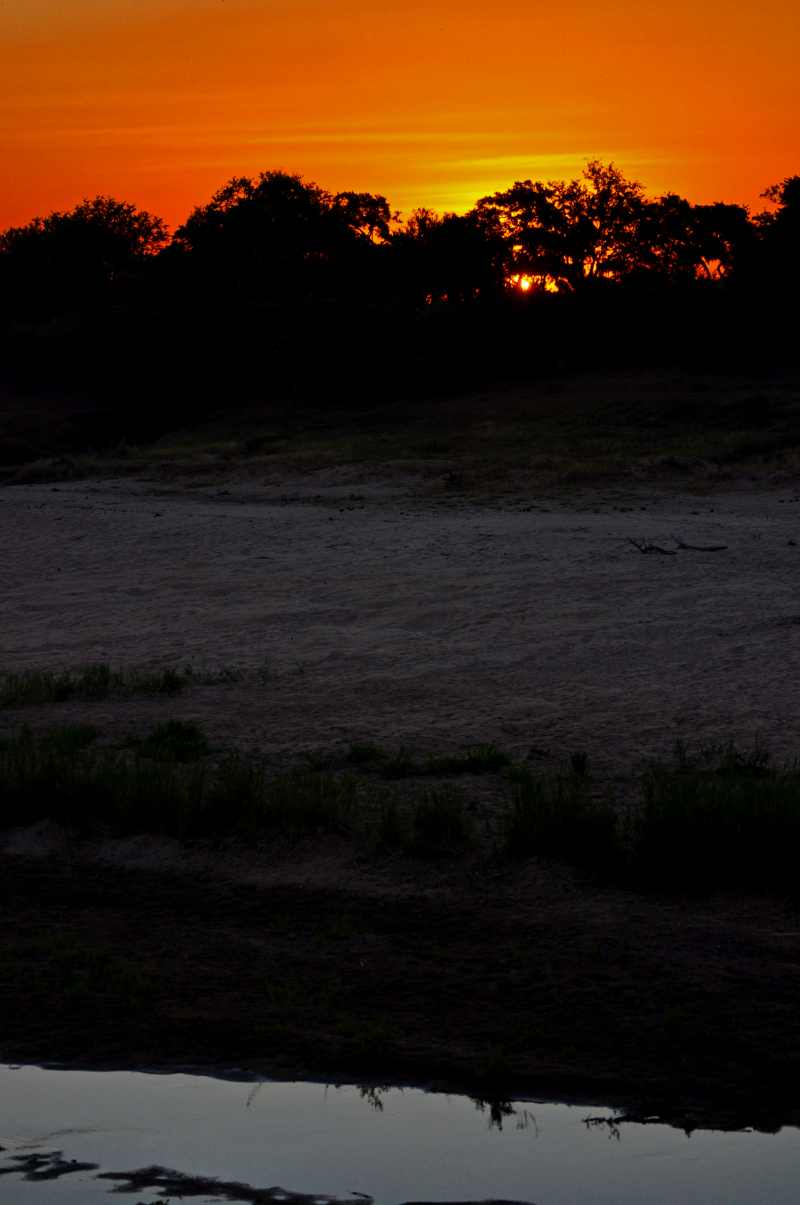 Above - Although one has to be back in camp fairly early during winter there are still great opportunities to capture great pictures at sunset. This particular picture was taken from the bridge across the Letaba River. 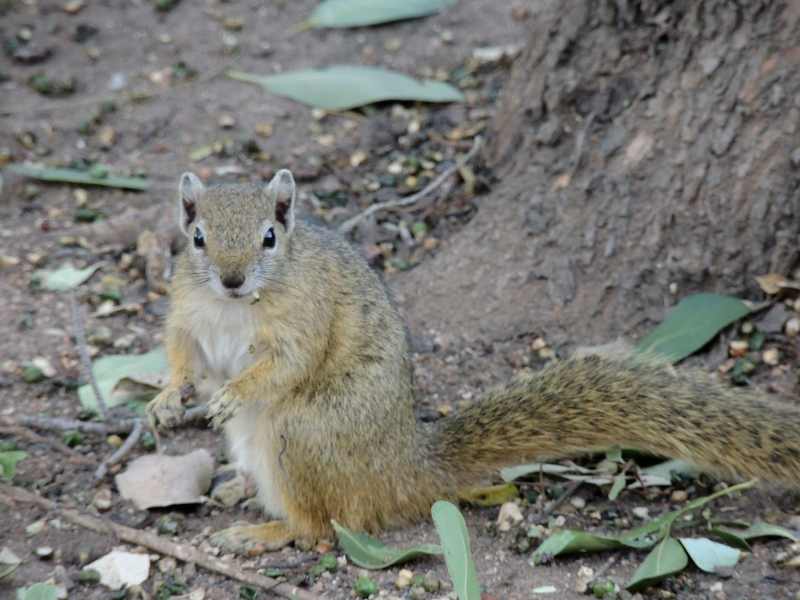 Above - All too often the little creatures in the Kruger National Park are overlooked. Tree Squirrels are quite common in some of the camps. 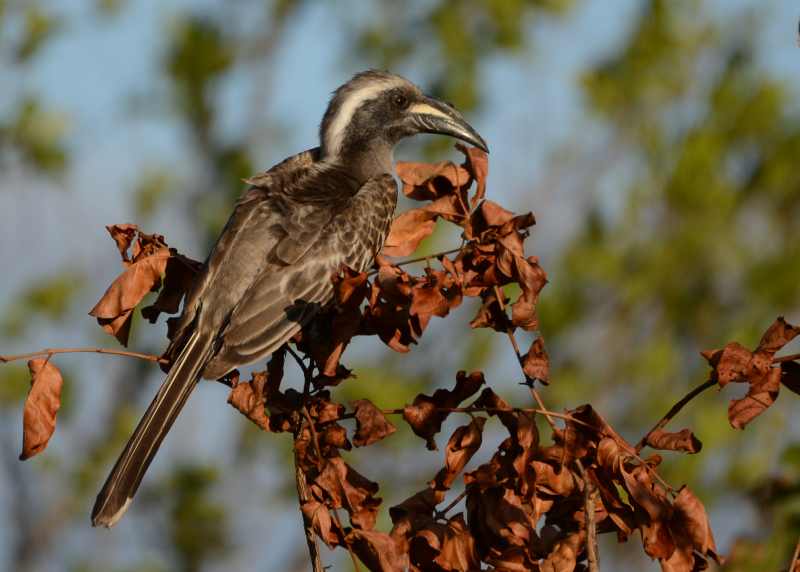 Some of the Kruger National Park Camps etc.

Please note that this is only a guide and, while we have made every effort to be accurate, we can't be held responsible for any errors.