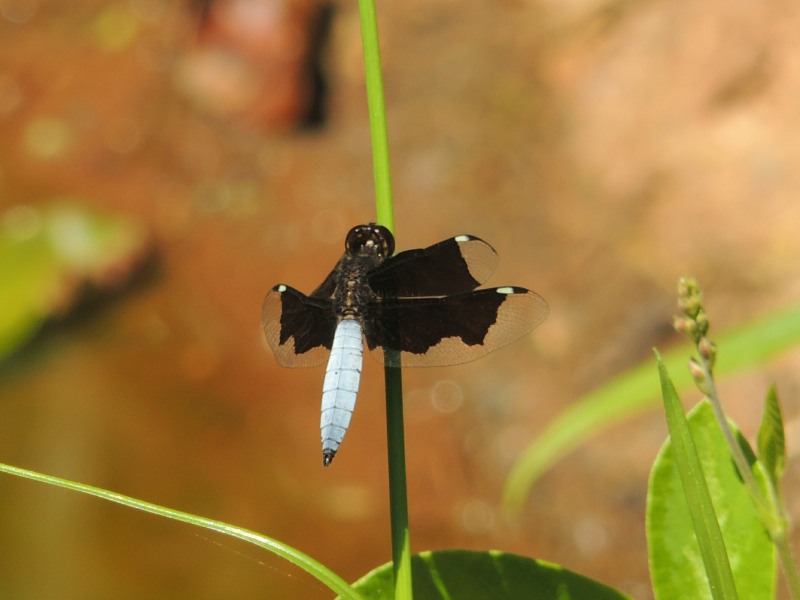 Both the male and female Lucia Widow are easily identified as they have extensive black markings on the leading edges of their front and rear wings. They are small, stocky dragonflies with a body length of around 3 cm and a wingspan of just under 5 cm. The males are particularly beautiful with a brilliant blue colouring on their abdomen, although this varies between individuals and regions. Females have a brownish abdomen with black markings.

The Lucia Widow is often found near water. This may be in the form of grass or reed lined pools, streams or dams. They may also be found in areas of open woodland. This dragonfly spends much of its time perched on vegetation. When it does fly it flies quite slowly. In some areas they can be seen all year round but in most of its range they are only on the wing from December to May.

Interestingly the Lucia Widow has the distinction of being the first named dragonfly in Africa. It was originally described in 1773.

The Lucia Widow dragonfly has a widespread distribution in Africa. In South Africa it is found along the Eastern regions of the country from Port St. Johns northwards through KwaZulu-Natal, Mpumalanga and Limpopo.

A Guide to the Dragonflies and Damselflies of South Africa - Author: Warwick and Michele Tarboton - Published: 2015 - Page: 170