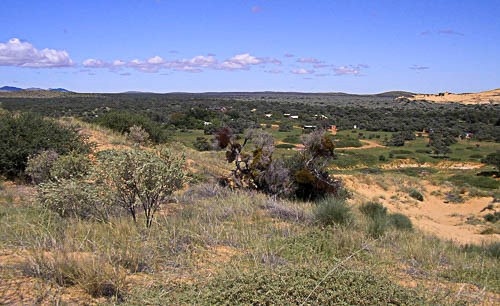 Witsand Nature Reserve is situated between Postmasberg and Groblershoop in the Northern Cape province of South Africa. The reserve covers 3,500 hectares and is known for its "roaring dunes". The sound may be heard when walking on the dunes or when the wind blows across them. Only a few areas in the work are know to "roar" or "sing" as there are very particular conditions they need to be present to cause it. These involve the size of the grains of sand, the presence of silica and the humidity levels.

Although it can be extremely hot in summer the temperatures are generally quite bearable. The sparse rainfall is restricted to February and March.

The reserve is home to a variety of wildlife including 150 bird species. Some of the species to look for are Pygmy Falcon, Kori Bustard, Secretary Bird, Lilac-breasted Roller, Crimson-breasted Shrike and three species of Sandgrouse. Amongst the mammals that may be encountered are Kudu, Red Hartebeest, Springbok and Gemsbok.

There is evidence to show that the area has been inhabited by humans for thousands of years.